a record of my obsessions

Now, back to my unexplainable love for Japan.

So I had a day off for shopping and cafe-hopping at Harajuku, land of fashionable people. So, the plan was to look for my favourite Japanese labels (minus EMODA, which is at Shibuya 109) like, Lowry’s Farm, Jeanasis, etc. And I knew STREAMER Coffee Company (by Sawada Hiroshi, celebrity barista that people from Maison Ikkoku know) was in the area, so to Harajuku I went. This photo was taken at at LAFORET, land of awesome shops. (What biased opinion?)

So after that no photos were taken because shopping. I’m in love with Japanese changing rooms. They also make me feel bad every time I buy something because they wrap it with such love and care and tissue, then carry it all the way to the exit of the store, and bow until I’m out of their sight.

Streamer, from the outside. It took me a really long time + asking for directions + google maps + WHY IS IT UP A HILL to find it. I almost jumped for joy – but had to keep it in because we’re in Japan guys be cool…

The latte art was amazing, but the coffee was normal. Sweeter than normal, probably because Japanese milk is creamy, but nothing special. Maybe I was expecting to see rainbows and shooting stars. And I also missed brewed coffee.

And so I walked back to Omotesando and found this!!!! It’s a tiny obscure shop under the famously long-queue Eggs n Things. I loved the place! The baristas were friendly, I was the only one in there so I could talk to them, and they played Florence + The Machine! Talk about an awesome place to be in. 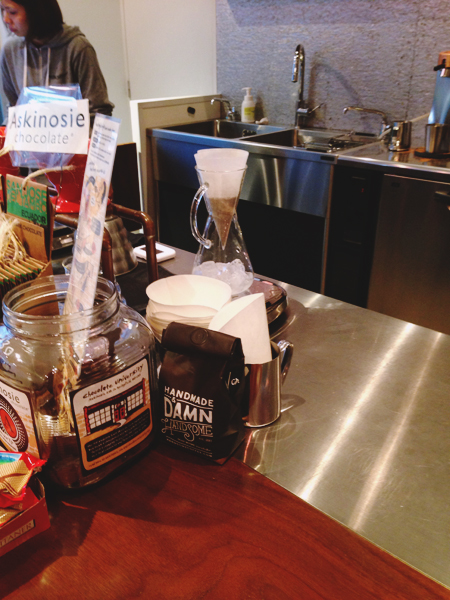 And here, I cultivated the love for brewed coffee (specifically the chemex) over ice.

And made by the sweetest baristas. ❤ Hanging out there was really enjoyable.

It was getting dark and I wanted to get back to the hostel, but I went to look at Christmas illuminations first. :3 Ahhh, Japan and your fairylight abuse.